When the photographers from the Detroit Publishing Company captured their imagery of 1900's Cincinnati they were looking at a downtown full of industrial manufacturing, rail yards and warehouses, these structures  dominated the cities eastern side.  Cincinnatian's fabricated steel buildings at Edwards Manufacturing, built the carriages and buggies at The Acorn Buggy Company, and bought and sold agricultural supplies at The Union Grain & Hay Company.

Flash forward 100 years, only a handful of the now converted warehouse buildings stand, the once powerful industry base is 80 years removed and in its place is the eastern arm of a transportation hub flowing around downtown.  The grand Pennsylvania Station that once stood at the end of the  L&N Bridge gave way to the Queen City's transportation jewel of the 1930's, Union Terminal, the Mt Adams incline was replaced by the automobile and Columbia Parkway.   As the city's profile change so did the landscape, with one exception, the Mt Adams hilltop, the 10 to 15 houses on the street still know as Oregon remain largely intact except for the necessary upgrades time demands.  The Rookwood Pottery from where the image was captured ceased operation long ago, but the structure stands nobely on the hillside over looking the valley.

Photography has changed dramatically in those 100 years as well.  To capture the original imagery the photographer exposed 8x10 glass negative plates, creating four individual photographs that were beautifully preserved and archived at the National Library of Congress.  Today's technological advances allowed us to download the hi resolution files and digitally stitch the four scene's together using the overlaping areas on each plate, thus producing the unique panorama.  For the 2014 image we simply used a wide angle lens with minimal distortion, then added the border effect in post production.  I didn't have to work nearly as hard!  But he had better weather. 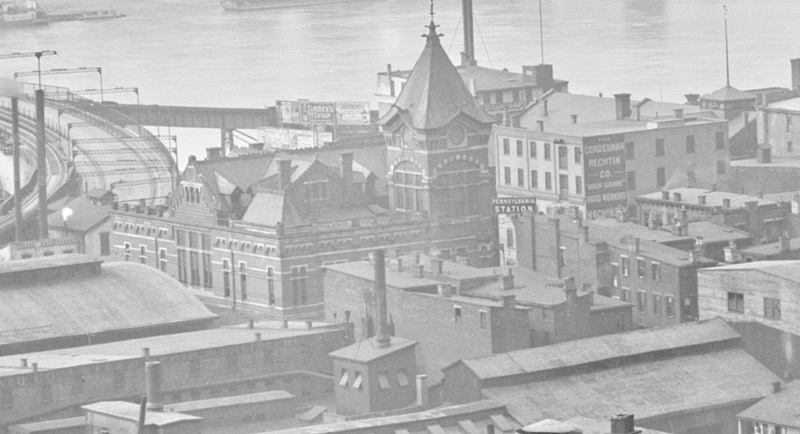 Above: A Closeup from the 1910 Photograph showing Cincinnati's Pennsylvania Station on the corner of Pearl and Butler Streets just east of the

L & N bridge. This area is located to the left side of the large panorama along the river.