Photographs and Memories for Father's Day 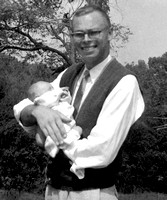 "If your going to sneak into the pool hall, don't wear a shirt with your name on the back son",  said my father as he tapped me on my shoulder thus eliminating any dream I had at becoming the next pinball wizard.

To further understand this event you need to know my Dad was pretty laid back in the early 70's, he gave my brother and I free run of the 'one stoplight town' (Warsaw, Kentucky), which we grew up in.  He had only two rules, be home at 5pm for dinner and do not go near the pool tables or pinball machines at the pool hall. Oh, I was allowed to go in and order a burger or soft drink, but purchasing carryout at this fine establishment was my only option.  Never was I to pass the swinging Cantina doors and enter the "land of bililards and pinball".

It wasn't the fact that my name was on the back of my shirt that got me busted, oh no.  You see I had done this dozens of times, collect pop bottles, cash them in for 2 cents each at Wood's Carryout  and head to the pool hall with the bounty.  What I failed to take into account, dad was working in town this particular afternoon, and the pool hall was one of his accounts, big overlook on my part.  Later that evening dad sat me down and again explained his reasoning for not allowing me in this establishment, only this time he didn't yell or give me the customary just sit there and listen lecture.  It was more man to man, a two-way conversation, I grew up a little that day.

These photograph's are also images that remind me of my father and his father's love that has blessed four generations of Arrasmith's.  My biggest regret is only taking one portrait of dad in the past 20 years, the same goes for my grandfather.  The image of my grandfather, Robert Arrasmith, has always been one of my favorites, to me it captured his spirit, even into his early 90's he could tell stories with the best of them, and part of them were true.

Thanks dad for modeling what it is to be a father,  I love You....